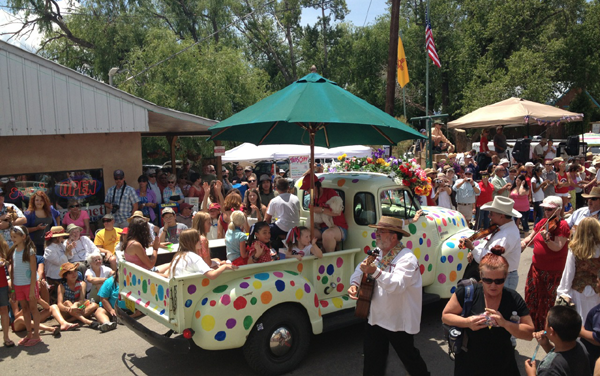 A Tradition for Locals; a Treat for Visitors

The Arroyo Seco 4th of July Parade is a procession of horses, politicians, kids, clowns, farmers, fire trucks and free spirits. All the diversity of Taos County melds together and strolls through this funky village nine miles north of the Town of Taos. The commercial area of Arroyo Seco, or simply Seco as it is called by locals, is one block long; the parade route is two.

Anyone and everyone can be in the parade. An LGBT float could be followed by a couple of cowboys on horseback, a ’62 Chevy Impala lowrider and the War Chief of Taos Pueblo. Behind him are some kids hurling Tootsie Rolls at the crowd from a trailer stacked with hay bales.

Onlookers, many of them as colorful as the parade itself, stand shoulder-to-shoulder, eager to be sprayed by water guns or catch flying hotdogs.

Some years the parade lasts less than a half hour (it starts around noon), but no matter the runtime there is live music before and after. And the 4th of July isn’t the only time the streets of Seco are filled with live music. Every summer, Seco Live Presents brings in some great musical acts from around the world for free concerts at the Scott Carlson Pottery Gallery. Local merchants and some dedicated residents contribute in various ways to make the free concerts true community events. In past years, the Sierra Leone Refugee All Stars, Vieux Farka Toure and Trombone Shorty have played.

On Saturday, August 30th, Zydeco Sweetheart Rosie Ledet and the Zydeco Playboys return. Ninety-year-old accordion diva Antonia Apodaca and her band, Trio Jalapeño, are also playing, making the night a Louisiana vs. New Mexico accordion showdown that’s sure to get the crowd moving.

Like the Fourth of July parade, the village of Arroyo Seco is a mixture of old, new, artsy and eccentric. Being halfway between the Town of Taos and Taos Ski Valley makes it an easy and convenient visit.

Seco’s small business area is dense and the road is narrow with tight turns, yet it there is no sense of congestion. Once you’ve parked your car or bike, you have a wide variety of shops and galleries to visit.

Hungry? Choices range from fine dining to farm-to-table to chicharrón burritos at Abe’s Bar & Grill — a popular hangout with locals.

Anchoring the west end of the town is the Abominable Snowmansion, a hostel where you can camp or rent a bed in a dorm, private room, cabin or tipi. The Snowmansion is a monument to the hippy era of the early ‘70s. La Santisima Trinidad, or the Holy Trinity Church, is an early 19th Century church close to the east end of town. The church underwent extensive restorations in the 1990’s.

Shopping is no less eclectic, with choices ranging from fine art jewelry and handcrafted ceramics to antiques and a variety of unusual finds at the Arroyo Seco Mercantile.

A sweet ending to a stroll through Seco is an all-natural rBGH-free ice cream cone from Taos Cow.

The fun doesn’t stop with the end of summer.

Whatever the season, the village of Arroyo Seco is an interesting place. In Autumn, golden aspens surround the village located at the foot of the Sangre de Cristo mountains. During ski season, Arroyo Seco sees quite a bit of activity as skiers and snowboarders going to and from the Taos Ski Valley stop for coffee or shopping.

If you’re visiting Taos, plan on a side-trip to the charming village of Arroyo Seco. It’s well worth a visit any time of the year. 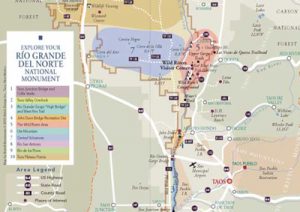