Taos Plaza today: four Taoseños and one Taoseña prepare to install forty banners in the historic district commemorating the 100th anniversary of the formation of Taos Society of Artists. Here’s a bit of the story:

Taos, 1915: Six artists formed an alliance – Taos Society of Artists – which would transform Taos into a world-renown art colony.

The six professional artists from the East had made Taos the focus of their work. After founding Taos Society of Artists that year, they began sending circuit exhibitions of their paintings across the country and exposing audiences to new cultures, new visions, and a new landscape. This put Taos “on the map” as an art destination, making it one of the most important art colonies in America. It is today one of the oldest art colonies still in existence.

In recognition of the significance of this story in the history of American art, the Taos community has dedicated 2015 to a celebration of the 100th anniversary of the founding of Taos Society of Artists.

Please see TAOS.org/100 for more about this story and the events and exhibitions planned to commemorate it.

Exhibition and Event Highlights in 2015 (find full list at BeyondTaos Art Calendar)
As part of the 100 Years of Taos Art Celebration, Taos museums will be presenting major exhibitions of work from Taos Society of Artists members. Taos Center for the Arts, Taos Art Museum, Taos Arts Council, and local art galleries will be hosting exhibitions showing works by contemporary Taos artists, examples of the evolution of art in Taos in the past 100 years.

Working Class Theatre will present a series of theatrical readings from August through September at historic locations throughout town lived in or frequented by the members of Taos Society of Artists. “Taos Tales” will portray members of the society with a script written from letters between the artists and to their families, patrons, and other first hand accounts.

Both the Taos Historical Society and the University of New Mexico/Southern Methodist University coalition will host lecture series around the topic of art in Taos one hundred years ago.

The Couse-Sharp Historic Site has organized a panel discussion including six descendants of the Taos Society of Artists members, family members who grew up hearing the stories of Taos in 1915. The discussion will allow audience participation and will be held at Taos Community Auditorium in June. 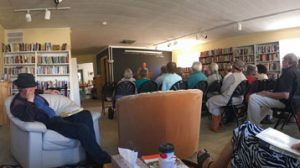