I enjoyed this article in the summer 2015 edition of Discover Taos, published by Taos News, and asked Joan if BeyondTaos could reprint it to illustrate how far-reaching Taos’s influences are in the arts—literature as well as the visual arts. With her permission, here is a look at some of the world’s famous authors who spent time in Taos, starting with the star of them all, DH Lawrence. Thanks Joan.

For fans of the author D.H. Lawrence, a visit to his ranch in San Cristóbal is a must-do activity

D.H. and Frieda Lawrence first came to New Mexico in 1922 at the invitation of Mabel Dodge Luhan, a noted patron of the arts who settled in Taos. The Lawrences stayed three times for a total of 11 months. On the second, Luhan gifted them the ranch. In return they gave her the manuscript of “Sons and Lovers.”

The 160-acre property, also known as the Kiowa Ranch, has two modest cabins made of Ponderosa pine logs cut in the 1880s and adobe plaster. The Lawrences lived in one, and their friend, Lady Dorothy Brett, in the other

A chapel-like building serves as D.H. Lawrence’s memorial. The story goes Frieda mixed his ashes with concrete to create the altar inside. Frieda’s grave is located outside.

Then, there is the tall pine tree beneath which Lawrence wrote in long hand. Artist Georgia O’Keeffe immortalized the pine in her painting, “The Lawrence Tree.”

Lawrence wrote a short novel, “St. Mawr,” at the ranch, plus a biblical drama, “David” and parts of “The Plumed Serpent.”

Frieda, who died in 1955, gave the ranch to the University of New Mexico to be used “for educational, cultural and recreational purposes” and to serve as a memorial for her husband, who died in 1930.

The ranch was closed for several years. But thanks to the efforts of the Taos Community Foundation and the D.H. Lawrence Ranch Alliance, the ranch was reopened in 2014 after repairs were made to its historic buildings.

Recent visitors to the ranch include Joanna Terry, a descendant of Frieda who lives in England. She was welcomed at a reception, fittingly at the Mabel Dodge Luhan House in Taos.

Sharon Oard Warner, a University of New Mexico professor who is the university liaison for the ranch, said Terry’s visit was “a mark of the enthusiasm and love we all have for the ranch.”

The ranch was expected to open full-time in May. Visit dhlawrencetaos.org for a schedule and events.

GETTING THERE:
To reach the ranch from Taos, take State Road 522 North toward San Cristóbal. Look for signs for San Cristóbal Road and the D.H. Lawrence Ranch. The last leg is 7 miles on a good dirt forest service road. Bear right at each branch until the end. Watch out for cows.

OTHER LATE, GREAT AUTHORS WITH A TAOS CONNECTION

PADRE ANTONIO JOSÉ MARTÍNEZ, was a priest, educator, publisher, rancher, farmer, community leader, and politician. He appears as a character in author Willa Cather’s “Death Comes for the Archbishop.”

SPUD JOHNSON was a poet and the editor of the Laughing Horse magazine and The Horse Fly, a one-page newspaper.

MABEL DODGE LUHAN was a grand dame of the arts, drawing many on this list to Los Gallos, her Taos home. She wrote several books including “Edge of Taos Desert: An Escape to Reality.”

ELIZABETH SHEPLEY SERGEANT was a World War I correspondent, author and biographer; she wrote about Taos Pueblo and New Mexico.

ROBINSON JEFFERS, a poet, visited in summers during the 1930s at Luhan’s invitation.

THOMAS WOLFE, a novelist whose works include “Look Homeward Angel,” arrived in 1935 at Luhan’s invitation but as the story goes, she refused to see him because he was too drunk.

THORTON WILDER, who won the Pulitzer for drama and literature, also visited Luhan.

WILLA CATHER, an author who won the Pulitzer Prize, was a frequent visitor to Los Gallos.

ALDOUS HUXLEY, another Luhan guest, wrote “Ends and Means” while in Taos.

MYRON BRINIG, a Taos resident, was a prolific novelist who wrote about the hardships of miners and labor activists in his native Montana.

VLADIMIR NABOKOV, the Russian author of “Lolita,” spent a disappointing summer in 1954 with his family in Taos.

FRANK WATERS, who lived in Arroyo Seco, wrote novels and historical works about the Southwest such as “Book of the Hopi” and “The Man Who Killed the Deer.”

EDWARD ABBEY, author, environmentalist and political anarchist, wrote “Desert Solitaire” and “The Monkey Wrench Gang.” While in Taos, he worked as a newspaper reporter and bartender.

JUDSON CREWS was a poet, bookseller, editor and small-press publisher who published the works of fellow poets.

JAMES DOSS, a mystery writer, was known for his many novels about the fictional Ute detective/rancher Charlie Moon.

TONY HILLERMAN was an author of detective novels and non-fiction. A former editor of The Santa Fe New Mexican, he captured Taos with his short story “The Great Taos Bank Robbery.

Learn about literature in Taos now, at SOMOS, The Literary Society of Taos

A related BeyondTaos blog post about the reopening of the DH Lawrence Ranch, July 2014.

Have you seen the DH Lawrence paintings at Hotel la Fonda de Taos on Taos Plaza? Here’s a glimpse. 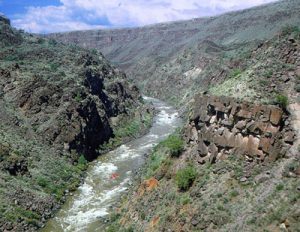