Two major art events scheduled for fall 2015 have released calls for entries to artists practicing in a multitude of disciplines for inclusion in a series of exhibitions slated for September and October.

The Paseo, a festival dedicated to bringing the art of installation, performance, and projection to the streets of Taos, is ramping up for its second annual production of outdoor art in the historic district of Taos. In 2014, twenty artists’ works were presented in a one-day festival attended by over 3000 people. Matt Thomas, The Paseo founder and managing director, expects to accept twice that many art installation projects in 2015. The festival will span two days, September 25 and 26, 2015.

Matt explains The Paseo concept by outlining the “Core Ethos” he and the founding team developed in early 2014:

Artists are asked to describe their installation project concept in a 100-word statement with images or drawings, perhaps of similar works staged elsewhere. A project budget and a personal biography are also requested along with a $25 submission fee. There are no requirements as to residency or gallery representation nor media limitations other than the fact all installations will be out-of-doors.

A ten-member multi-disciplinary advisory committee will judge the entries and extend invitations for inclusion by March 2015.

Learn more at PaseoTaos.org. Deadline for submission is February 1.

Pressing Through Time: 150 Years of Printmaking in Taos is a one-time, town-wide series of exhibitions that will be mounted in five Taos museums and many privately-owned art galleries in October through January 2016. The concept for the exhibits was developed by art historian David Farmer and architect-artist Robert Parker.

Some of the venues will exhibit historic examples of prints made in Taos. The Harwood Museum of Art, the E.L. Blumenschein Museum, Millicent Rogers Museum, The Couse-Sharp Historic Site, and Doel Reed Art Center plan historic exhibitions including works by Taos Society of Artists (it is worth noting 2015 marks the 100th anniversary of the founding of “TSA”) members, Taos Moderns and contemporary printmakers.

Works by contemporary printmakers will be selected by a nationally recognized jury and will be exhibited in Taos at the Encore Gallery of the Taos Center for The Arts (TCA) from October 2, 2015 to January 18, 2016, and at the Taos Art Museum at Fechin House from October 9, 2015 to end of January 2016.   The jurors for Pressing Through Time are: Helen Frederick, Bill Lagattuta, and Dan Welden. The jury will also award first-, second-, and third- prize recognition, and two honorable mentions.

While the Pressing Through Time call for entries is national in scope, it is requested that all artists have a relationship with Taos, having lived here or spent significant time here, but perhaps printed elsewhere. “Contemporary printmaking” is defined as a time period from about 1970 to the present.

All forms of printmaking are eligible as long as the images are originals and have been made from specially prepared plates or blocks and printed as impressions through a press, made as a silkscreen print or a hand-rubbed print. Innovative techniques may include use of photocopy art, computer generated imagery, offset-lithography mixed media and sculptural or three-dimensional prints.

This call for entries begins on January 12 and ends March 2. Artists will be notified by April 1, 2015. Learn more at PressingThroughTime.com.

Pictured above: An exhibition in the Encore Gallery of Taos Center for the Arts (one of the venues for Pressing Through Time) by Geraint Smith and a photo at The Paseo 2014 with robot by Christian Ristow by David Mapes. 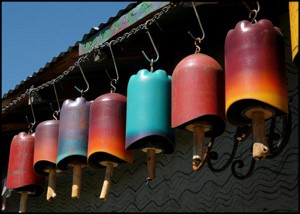 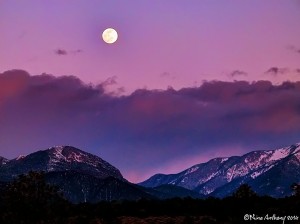