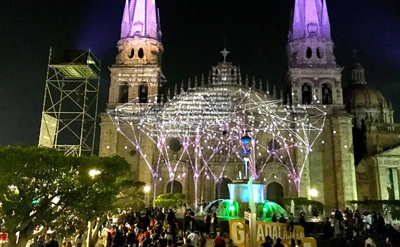 The February 2018 edition of BeyondTaos’s series about Taos artists exhibiting “beyond” features three women artists (all are in current The Harwood Collection: Work by Women exhibition) and one male artist. Agnes Chavez presents a light projection piece in Guadalajara, Mexico. Annell Livingston and Nicki Marx are both preparing for Santa Fe exhibitions. Larry Bell is showing glass at Hauser & Wirth in Zurich. Enjoy the luscious photos of their artwork.

New Mexico artist/educator, Agnes Chavez and projection artist, Joe Abraham Dean have been invited to project the (x)trees in Guadalajara as part of the U.S. Arts Envoy Sister City initiative. (x)trees is a video projection that will generate a forest of dynamically growing trees on to the Guadalajara Cathedral. The tree branches are generated from messages collected from participants of the Sister City initiative between Albuquerque and Guadalajara, capturing the collective spirit of the two countries through text messages. Branch by branch the trees form and the messages from each branch are displayed for a fleeting moment. The (x)trees represent our universal connection to each other through nature and technology.

Sister Cities International is hosting its first-ever U.S.-Mexico Sister Cities Mayors Summit in Guadalajara February 15-16, 2018. Designed to promote grassroots citizen diplomacy and the concept of cross-border, city-to-city collaboration in the 21st century, the summit will address themes related to immigration, innovation, economic integration, trade, and security. Agnes will be projecting the (x)trees for the summit luncheon as a way to underscore the power of art and technology to act as cross-cultural communication tools and binding agents between cities. Follow (x)trees in Guadalajara on Facebook!

Agnes Chavez is the founder of the STEMarts Lab and cofounder of The Paseo Project outdoor arts festival in Taos.

The artist says of her work: “My work is a personal celebration of life and an exploration of natural materials. The process of working is for me a ritual, a dance, a prayer of thanksgiving and a plea for survival. I believe that our culture is sorely lacking in meaningful ritual and celebration and is lacking a deep, respectful awareness of nature.” The Elan Series to be shown in this exhibition is made of sand, acrylic paint and feathers on plywood.

Nicki Marx has maintained a studio in Taos since 1985.

The gallery describes the artist’s work: “Annell Livingston’s hard-edged horizontal, vertical, and diagonal gridded paintings are filled with a multitude of hand painted gouache shapes. The abstract works offer a lively balance between the geometric and organic as variances of value and hue subtly shift through rigid linear compositions.”

Annell Livingston is a native of Houston and has lived in Taos since 1994.

Hauser & Wirth has represented Bell in Los Angeles, New York and London but this is his first exhibition in the Switzerland gallery. The gallery’s website describes the sculpture on exhibit:

‘Venice Fog: Recent Investigations’ is an exhibition of new laminated glass works with colour combinations inspired by the marine fog which rolls into Venice CA, the location of Bell’s studio since the early 1960s. Large cubic glass works will showcase Bell’s interpretation of the luminosity created by the dispersion of water in the fog intermingling with the lights of Los Angeles’ desert plain. The structure presented is based on one Bell originally introduced in 1992 in an outdoor commission for the Museum Abteiberg, Mönchengladbach, and features a four-paneled structure within a larger version of itself. This sculpture allows two colours to be fused together through reflection and refraction.

While these monumental works occupy and transform Hauser & Wirth’s 2nd floor space in the Löwenbräu, they will be accompanied by a series of 1:6 small-scale maquettes of the same structure. In turn, the sculptures will animate and be animated by the natural light coming in through the gallery’s wall of windows; the varying conditions at different times of day repeatedly altering visitors’ experience of the works.

Bell’s understanding of the potential of glass and light allows him to expand visual and physical fields of perception, and his sculptures to surpass traditional bounds of the medium. The exhibition presents true examples of Bell’s glass work mastery, as the sculptures appear material yet immaterial, hard yet ethereal, transparent yet saturated with a myriad of fleeting hues.

Larry Bell has maintained a studio and home in Taos since the early 1970s. He also has a studio in Venice, California. 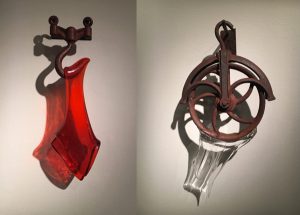