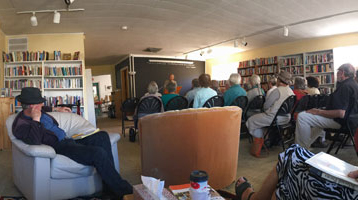 November 1, 2017 – SOMOS, the Literary Society of Taos, is launching an inaugural literary series titled November Prose Month, with nine evenings of free prose readings by twenty writers. All readings will be held in SOMOS Salon at 108 Civic Plaza Drive in Taos. Also included in the month-long series are three Saturday workshops focused on the craft of prose writing and performance.

Jan Smith, SOMOS executive director, explains, “The seed for the prose month concept comes from NaNoWriMo (National Novel Writing Month) which began in 1999. That year, fifteen writers participated. By 2015, participation had soared to over 450,000 writers who signed up to complete 50,000-word prose manuscripts between November 1 and 30.”

The format for November Prose Month follows the organization’s popular April Poetry Month, which gives local and regional poets a platform for reading new and published work to an enthusiastic Taos audience.

Authors will read from prose genres including memoir, creative nonfiction, long and short form novels, flash fiction, mystery/thrillers, and short stories.  The schedule of free readings at a glance:

Sam Richardson is a Taos-based artist, storyteller and writer. Before moving to Taos a number of years ago, Sam lived in the Big Bend of Texas where he edited newspapers, was a contributor to state dailies, exhibited in regional art galleries, and operated his own guide service and tour company. His newspaper columns won four Texas press awards. His book about his time in the Big Bend, Twelve Lessons of the Desert, has been a consistent seller in Texas markets. His newest books, Characters Who Never Got Their Own Comic Strip, An Adult Coloring Book and My Little Book of Caricatures, Third Edition, have been released this year.

Iris Keltz’s first book, Scrapbook of a Taos Hippie: Tribal Tales from the Heart of a Cultural Revolution (Cinco Puntos Press, 2000) is an award-winning historical memoir documenting the counterculture through vignettes, oral histories, photographs, newspaper articles, and other cultural memorabilia. As a freelance journalist, Keltz’s articles, op-eds, and essays have appeared in print and electronic media, locally, nationally and internationally. She has spoken about the Palestinian-Israeli conflict on radio, in universities, synagogues, churches, high schools, and civic centers, and as part of a national lobby with the Tikkun community in Washington, DC. She is a founding member of Jewish Voice for Peace-Abq and Friends of Sabeel-New Mexico.

Pat Pollard had a successful career as a commercial photographer before she relocated to Taos in 1990 and began to experiment with various media to express her own personal vision. For the last several years, she has concentrated solely on two-dimensional painting. A writer of poetry and short stories when she was young, Pat set painting aside to write a memoir, Long Time Lost, soon to be published by Nighthawk Press.

Jane Lawless, a Chicago native, has worked as a television script writer, freelance editor, and writer-producer of educational materials, including an audio tour-guide program for Chicago’s Field Museum of Natural History. Her short stories have appeared in Bellowing Ark, Big Muddy, Chicago Quarterly Review, descant, Rosebud and Zahir. She has been a resident of Colorado Springs since 2000, and published a collection of her short stories early this year. The Search for the Villa Melzi Gardens received a glowing review from Kirkus and won second prize in an international competition sponsored by the Colorado Independent Publishers Association.

Scott Archer Jones is currently working on his sixth novel. He lives in northern New Mexico, after stints in the Netherlands, Scotland and Norway. He’s worked for a power company, grocers, a lumberyard, an energy company (for a very long time), and a winery. His novel, Jupiter and Gilgamesh: A Novel of Sumeria and Texas, was a finalist in four categories of the 2014 New Mexico-Arizona Book Awards and won a 2015 Bronze IPPY and a 2015 Silver FAPA President’s Award. The next book The Big Wheel, arrived in March, and won FAPA’s Silver and Gold. River Rising is planned for release with Fomite at the end of the year.

Tiffany Jama’s writing is process-oriented. She found a deep connection to herself upon first journaling in 1991. Writing became her tool for survival, understanding and connection to parts of herself she felt were hidden from view. The blank page and the practice of writing are both terrifying and healing, often revealing bits of wisdom and shadow. Often at war with her own practice, she returns over and over, never betraying herself for long.

Rick Collignon is the author of four novels, The Journal of Antonio Montoya, Perdido (the first two volumes of his Guadalupe trilogy), Madewell Brown and A Santo in the Image of Cristobal Garcia, all set in the Southwest. Originally from the Chicago area, he has lived in northern New Mexico for over 30 years.

Brian Allan Skinner has worked extensively in publishing as a writer, editor and illustrator. The publications in which his work has appeared range from the literary (Kirkus Reviews) to the scientific (Scientific American Newsletters). With more than 120 short stories published, he continues to refine his skills, working on his third collection of “linked stories.”

Lauren Bjorkman is the author of two young adult novels, Miss Fortune Cookie (Holt, 2012) and My Invented Life (Holt, 2009). Her short story, “The Shark King,” appeared in an anthology called The First Time. When she grew up on a sail boat, she shared the forecastle with her sister and the sail bags. In the end, she managed to survive both seasickness and a personal terror of the ocean. And live to write stories.

Estelle Laure is the author of This Raging Light and But Then I Came Back, young adult books for most readers (maybe if you’re under 14, check with someone).” I like to write about darkness without discounting the light. I try to write stories I want to read myself, about life and death, family and love, and mostly how we cope with change and danger in our lives, two things we can’t avoid. I also like to write about magic. Always magic. Not necessarily the big, obvious magic, but the little things we could miss if we aren’t paying attention, the little pieces of magic that add sparkle and mystery to every day.”

Eileen Wiard came to Taos from Boston on a Helene Wurlitzer Foundation writing residency for two months in the summer of 2002. She fell in love with the high desert and never went back, leaving behind a teaching career that she loved for a life of writing plays, essays, and songs. Inside Outsiders is her first work of fiction.

Steve Fox is a writer, photographer, journalist and teacher. He’s authored two books of nonfiction and chapters in five books on U.S. mass culture and cultures of the Southwest. He wrote and edited for Horse Fly, the alternative monthly in Taos, and contributed 120 columns to the New Mexico News Service that were carried by newspapers in ten New Mexico towns.

Anita Rodriguez is a painter whose work incorporates Native American ceremonialism, Mexican mysticism and Hispanic folk art. Her book, Coyota in the Kitchen, was published by UNM Press in April, 2016. She was born in Taos to a family that has lived here for generations. In all her work, whether as a traditional enjarradora (adobe finisher), writer, or painter she mirrors, preserves, interprets and explores the diversity of her worlds – Mexico and the United States.

David Pérez is a writer, editor, actor, radio host, and performance teacher with decades of experiences in the literary and performing arts. He heads Verdad Creative, which offers a full range of writing, editing, and performing services. David is the author of two memoirs, WOW! (11B Press, 2011) and WOW! 2 (Nighthawk Press, 2016), both of which chronicle his multi-faceted coming of age. Latinostories.com has cited David as “One of the Top Ten Latino Authors to Watch and Read.”

Andres Vargas: Andres is a retired attorney and was a judge for Probate Court from 2006-14 in Taos. He is working on a full-length memoir about his childhood growing up in New Mexico.

Phaedra Greenwood is a creative writing teacher, storyteller, videographer and freelance writer who worked for five years as a journalist for “Tempo,” the art section of The Taos News. During that stint, she received two first place awards from the New Mexico Press Association for Best Column and Best Review. Her nature memoir, Beside the Rio Hondo, was published by Sunstone Press of Santa Fe and chosen as a finalist for the 2008 New Mexico Book Award. Greenwood lives a quiet life close to the land in Arroyo Hondo.

Michele Potter is a writer/editor/teacher and has taught at the University of New Mexico as an Instructor of American Studies focusing on environment and the Southwest and has been a ski instructor at Taos Ski Valley from August 1996 – Present. She writes about nature, the environment and geopolitics. She’s currently working on a full-length memoir about her father.

John Biscello has called Taos, New Mexico home since 2001. He is the author of the novels, Broken Land, A Brooklyn Tale and Raking the Dust, and a collection of stories, Freeze Tag. His fiction and poetry has appeared in numerous publications, including: Art Times, nthposition, The Wanderlust Review, Ophelia Street, Chokecherries, Adobe Walls, Kansas City Voices, the Tishman Review, and the Golden Walkman. Broken Land, A Brooklyn Tale was named Underground Book Reviews 2014 Book of the Year.

Johanna DeBiase is the author of Mama & the Hungry Hole, #4 in the Wordcraft Series of Fabulist Novellas. She writes from New Mexico where she is spellbound by the energy vortex of Taos Mountain. Originally from New York, she earned her BA in Literature and Creative Writing from Bard College and her MFA in Creative Writing from Goddard College. Her short fiction has been published in journals, magazines and websites including Portland Review, theEEEL, Monkeybicycle, Convergence, Prick of the Spindle and San Antonio Current. She has also received scholarships to attend the San Miguel Writer’s Conference, Vermont Studio Center and Rensing Center. The rest of the time, she is a certified yoga instructor, vintage clothing boutique owner and mother of one.

Jim O’Donnell is a freelance journalist, author, and conservation photographer who focuses on climate change adaptation, human migration, and public lands. He is the author of Notes for the Aurora Society as well as numerous articles, several sordid tales, many brilliant observations, a few half-finished novels, various angry letters to the editor, and other scribblings. O’Donnell lives in New Mexico with his two children.

Robert Silver: A Psychologist by background and training, storyteller by nature, Parkinson’s patient by chance, surviving growing up in a gritty part of New York City likely predisposed Silver not to give in or give up. From the Bronx High School of Science (1960) to the City College of New York (B.A., 1965, Psychology), and to Indiana University (Ph.D., 1972, Psychology), his educational path carried him far from his Bronx beginnings. Retired after 45 years of clinical and forensic psychology practice, consulting, and university teaching, he is immersed in creative nonfiction writing. Taos is home for him and his wife, abstract painter Dianne Frost. Silver’s work has been published in Chokecherries, HOWL, Storied Recipes and Storied Wheels, anthologies that express the quirky creativity of Taos, this magical place that some call “the soul of the Southwest.” A collection of his social and political commentaries was published as Tributes & Tirades: Taos Life and American Politics (Nighthawk Press, 2013). Silver’s latest work, Keeping On — Living Well with Parkinson’s Disease, is scheduled for publication in late 2017.

Saturday, November 18
“Out Loud! Speak Your Writing to Life” by David Perez 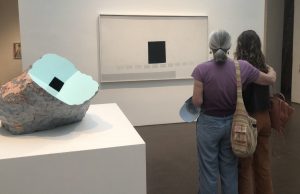