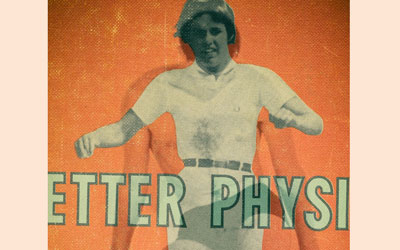 Our April report on Taos artists exhibiting outside of Taos begins with photographer Nina Anthony in Fort Collins, Colorado in the Center for Fine Art Photography’s exhibition, Illuminate, April 5 to 30. Randall LaGro is included in Surrealism Group Show at Blue Rain Gallery in Santa Fe, April 27 to May 19. Zara Bell organized a pop-up exhibition titled Space Between at White Whale Craft Ales Pub in Savannah, GA, April 6 – 20. And a group of well-known Taos artists spanning two generations have been grouped into one exhibition titled Taos: 1960s – Present that will open at Vivian Horan Fine Art in New York on April 26. That show will run through June 22.

Here’s a look at the artists and what they will be exhibiting.

Illuminate Photography Exhibition was juried by Peggy Sue Amison, creative director for East-Wing in Dubai. The show includes work by 31 international photographers whose images deal with light. Amison says, “I selected images that I felt spoke about different ways light can be captured and contained, but I also looked at how some of the artists use alternative methods to expand on their own reality; how elemental choices of color, contrast and composition work together to transform otherwise mundane moments into acts of wonder.”

Nina Anthony has lived in Taos since 1993. She divides her time working as a Communications Coordinator for Amigos Bravos, a statewide water conservation nonprofit headquartered in Taos, and exploring the outdoors to capture photographs of the dramatic landscapes and Southwestern culture that she loves.

Originally from Toledo, Ohio, Randall LaGro has lived and worked in Taos for nearly 30 years. His work has been exhibited nationally and internationally and can be found in numerous private and museum collections. He offers workshops in his studio to artists interested in learning his mixed media and assemblage techniques and printmaking skills.

Zara Bell in Space Between

Space Between is a pop-up exhibition of work by Zara Bell and Morgan Adler, both art students at Savannah College of Art and Design. Zara is about to complete her Masters of Fine Arts degree with a focus in printmaking. Her work combines the written word with found images, representations of popular culture.

Zara Bell was born and raised in Taos. She has degrees in art and writing from both UNM and SCAD and is now completing her MA in Savannah. (Full disclosure, Zara is the daughter of BeyondTaos’s Janet Webb and artist Larry Bell.) See her work on Instagram.

Standby for a more in-depth look at this exhibition, deserving of a dedicated blog post. 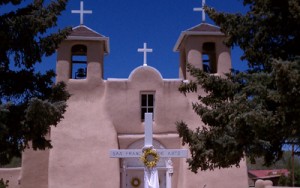 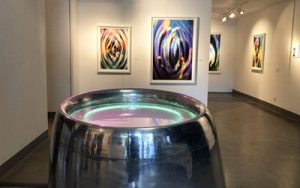 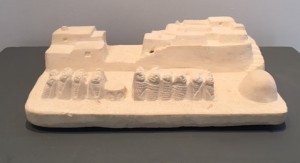