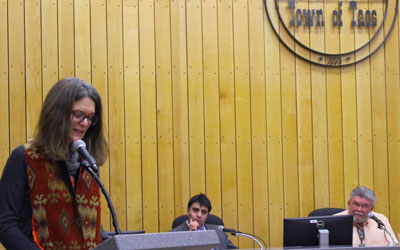 In 2017, SOMOS, the literary society of Taos since 1983, realized a long-time dream of creating the position of Poet Laureate in Taos. In August, the Taos Town Council approved the idea. A call for entries commenced, then a jurying* process ensued. By the end of the year, Sawnie Morris was announced as the inaugural Taos Poet Laureate. Her two-year reign began when she was introduced to the Taos mayor and city council members on January 23, 2018.

On February 15, 2018 Sawnie Morris spoke to an enthusiastic audience of SOMOS friends. Here is a transcript of her first public presentation as Taos Poet Laureate.

My gratitude goes to Jan Smith, members of the Board of Directors of SOMOS, the Town of Taos, the Witter Bynner Foundation, the judges, and to all of you who took the time to be here today to celebrate poetry with me.

I am honored to assume the role and responsibilities of the Inaugural Poet Laureate of Taos.

The first thing I want to say is that this is not about me – this is about us!

The poet laureateship is about living in a community that values the literary arts enough to recognize them in this way. It is about all of us who are mad enough and blessed enough to consecrate our lives to writing – and to do so in a small rural town in the mountains.

No matter what genre we write in, poetry is at the core of it.  Every word is a poem. Every word began as a metaphor, an image, a sound meant to evoke something or someone, meant to communicate with others. As past U.S. Poet Laureate Billy Collins has said, poetry is the way the human heart tells its story.

I am keenly aware that we are all in various stages of becoming and in this room, in this community, exist many, working more or less anonymously, everyday, who  –  because of their commitment and courage –  are contributing to the light of consciousness that is poetry – and whose work, because of their dedication, will be recognized.  I applaud and want to encourage that.

I am also aware that many people are afraid of poetry, until or unless they have an encounter when their guard isn’t up. With that in mind, my project as the Inaugural Poet Laureate is called POETRY IN WAITING and was inspired by the Poetry Society of America’s Poetry in Motion project, and an intimate encounter I had with a fragment from a Wallace Stevens poem that was on the wall of a subway in Manhatten in the early 90s. Taos does not have an extensive public transportation service, but we do have waiting rooms. For my project, I aim to post a poem or poem-fragment everywhere that people have a moment – by choice or necessity – to wait – which is to say, to pause, sit, reflect. For example, a bilingual poem by Neruda in the ER, a poem by Joy Harjo or Sherman Alexie at the movie theaters, a Juan Felipe Herrera poem on the Chili Line, a Mary Ruefle or Gwendolyn Brooks poem on the walls of doctors’ offices, insurance offices, auto repair shops, the jail, the DMV. (And, as more than one person has joked, maybe we need two poems in the DMV.)

Finally, I wish to make acknowledgement of just a few of the institutions, structures, and people working on behalf of poetry in our community. This list is, of course, not exhaustive.

We also have a number of poets with national reputations who are teaching poetry independently and/or through SOMOS: Lise Geott’s fire side chats and seminars; workshops with Veronica Golos, Cathy Strisik, and Leslie Ullman, and also the late Elaine Sutton; as well as, Robin Shawver and Kate O’Neil at UNM; and in the schools, Ned Doughtery and – one way or another – I’m sure, John Biscello; and for many years Sue Goldberg. I also want give a nod to the therapists working behind the scenes, who bring poetry in their practices; and all of teachers who are providing their students and clients with the special form of attention to the world that poetry provides.

I am also thinking of the liturgies that are spoken throughout our town on a weekly basis. And I want to express my personal gratitude for the Pueblo and the ceremonial dances that take place there and that are, in my experience, an ongoing and profoundly rooted manifestation of Poetry that through a kind of osmosis, if nothing else, have had a deep influence on my life and my work.

All of this reflects the values of our community – and in many cases the people who visit our community. Thank you.

The Literary Legacy of Taos

Taos has a strong literary history. I have assembled a few poems and poem-fragments – written by poets who have made Taos their home or spent a great deal of time in Taos – that I want to share with you.

Go deeper than love, for the soul has greater depth,
love is like the grass, but the heart is deep wild rock
molten, yet dense and permanent.

Let us lose sight of ourselves, and break the mirrors.
For the fierce curve of our lives is moving again to the depth
out of sight, in the deep living.

ROBERT CREELEY lived and wrote in Taos in the 1950s.

America, you ode of reality!

Give back the people you took.

On the four corners of the world

You thought of first but do not

People are your own word, you

Invented the locus and term

Here, you said and say, is

Where we are. Give back

What we are , these people you made,

Us, and nowhere but you to be.

TONY MARES died just a few years ago. Though he was from Albuquerque, this fragment is from his book-length poem Astonishing Light, which presents in poetic form a series of conversations with Taos sculptor, Patriciño Barela.

Mira, hermano, there are good priests.

But I try to avoid them all, the good and the bad.

I carve my figures from what I see here,

inside myself. A tender world,

is what I see in the wood. Old people,

are alive in the grain of the wood

Their voices come to me softened

by the morning fog. The drift

and spiral from the twists and turns

of splintered lives. These voices

have the fresh scent of cedar in the forest.

I try to set them free. That is all.

LUCY TAPAHONSO is Diné and the Inaugural Poet Laureate of the Navajo Nation. She is a frequent visitor to Taos and her work was important to me in my very early days in Taos. This fragment is from a poem in her collection Sáanii Dahataal, The Women Are Singing.

Before the birth, she moved and pushed inside her mother.

Her heart pounded quickly and we recognized the sound of horses running:

The thundering of hooves on the desert floor.

Her mother clenched her fists and gasped.

She moans ageless pain and pushes: This is it!

Chamisa slips out, glistening wet and takes her first breath.

The wind outside swirls small leaves

and branches in the dark.

JOY HARJO spent decades living in Albuquerque and has also spent time in Taos. Her poems had a tremendous influence on my own in my early years of writing. This is an excerpt from her poem “Grace” that appears in In Mad Love and War.

I could say Grace was a woman with time on her hands, or a white buffalo escaped from memory. But in that dingy light it was a promise of balance. We once again understood the talk of animals, and spring was lean and hungry with the hope of children and corn.

‘ANNAH SOBELMAN, who lived in Taos off and on for a total of close to 20 years and died last summer. This is her poem “A Physics of Desire,” from her collection, In the Bee Latitudes.

A PHYSICS OF DESIRE

JEAN VALENTINE has been a repeat resident at the Wurlitzer Foundation and returns to Taos from time to time to write. This is the title poem from her collection, Door in the Mountain.

DOOR IN THE MOUNTAIN

Never ran this hard through the valley

never ate so many stars

I was carrying a dead deer

tied on to my neck and shoulders

deer legs hanging in front of me

heavy on my chest

People are not wanting

to let me in

Door in the mountain

I want to share this additional poem of Jean Valentine’s because it is so relevant to our time, published in the New York Times Magazine.

you have come back for us,

to our fiberglass boat.

You have come back for us, & I’m afraid.

(But you never left.)

But nothing that comes now, after,

Even when the icebergs are gone, and the millions of suns

have burnt themselves out of your arms,

your arms of burnt air,

you are with us

whoever we are then.

Taos has an illustrious and inspiring history of poets and poetry!

Clothespins on the Line by Sawnie Morris

I’ll end with a poem of my own that appeared last April in Poetry, titled “Clothespins on the Line.”

CLOTHESPINS ON THE LINE

thinner   and thinner   in their   woody

streaked   feathers,   held together  only   by

the exposed   spiral   of   internal

convene.   A half-inch of

snow is rolled out   with   perfect    evenness

someone made a blank

accomplished,   you look at   your   nails

symbols.    As though,  the  unconscious

St. Thomas of Aquinas  got  a delirium

crispy  and  dipped  in  molasses.

If you were big enough

as good of a

As for your nails,

Thank you for being here and for your support of poetry.

Sawnie is a poet and a prose writer. She teaches poetry, prose, and dreamwork privately, online, at universities, and for small groups at her Ranchos de Taos home studio. Sawnie is an environmental activist and served as director of Amigos Bravos: Because Water Matters for many years. She is married to Taos artist, Brian Shields.

About Poet Laureates (by Wikipedia) 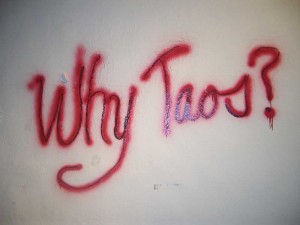